Definition: The dragonfly doji is formed when the open, close, and high are at the same price during an average or larger daily range. It has a long lower shadow.


General interpretation: Like all doji, the dragonfly doji can be interpreted both as a reversal or a continuation pattern. The important criterion is to identify where the doji is found. If the doji is found after a rally or at a high price area, it is generally viewed as a potential bearish reversal pattern. If it is found after a downtrend or at a low price area, it has potential bullish reversal implications. But if found in a sideways market, it is viewed as neutral. 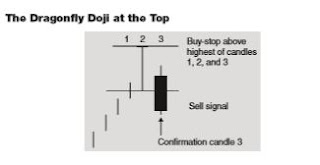 1. Sell if confirmation candle 3 closes below the low of candles 1 and 2.
2. In case of a resumption of uptrend, place buy‐stop above the highest of candles 1, 2, and 3.

■ Specific interpretation: The dragonfly doji is potentially bearish if seen after a strong uptrend or at a high price area. It is a potentially bearish candle because, although prices recovered after trading lower during the day, buyers who had bought along the lower shadow will be pressured to sell if the confirmation candle closes below the dragonfly doji’s low. A bearish confirmation candle is required before acting on this candle. If the open and close are near each other but not at the same price, it would be called a Hanging Man, a bearish candle