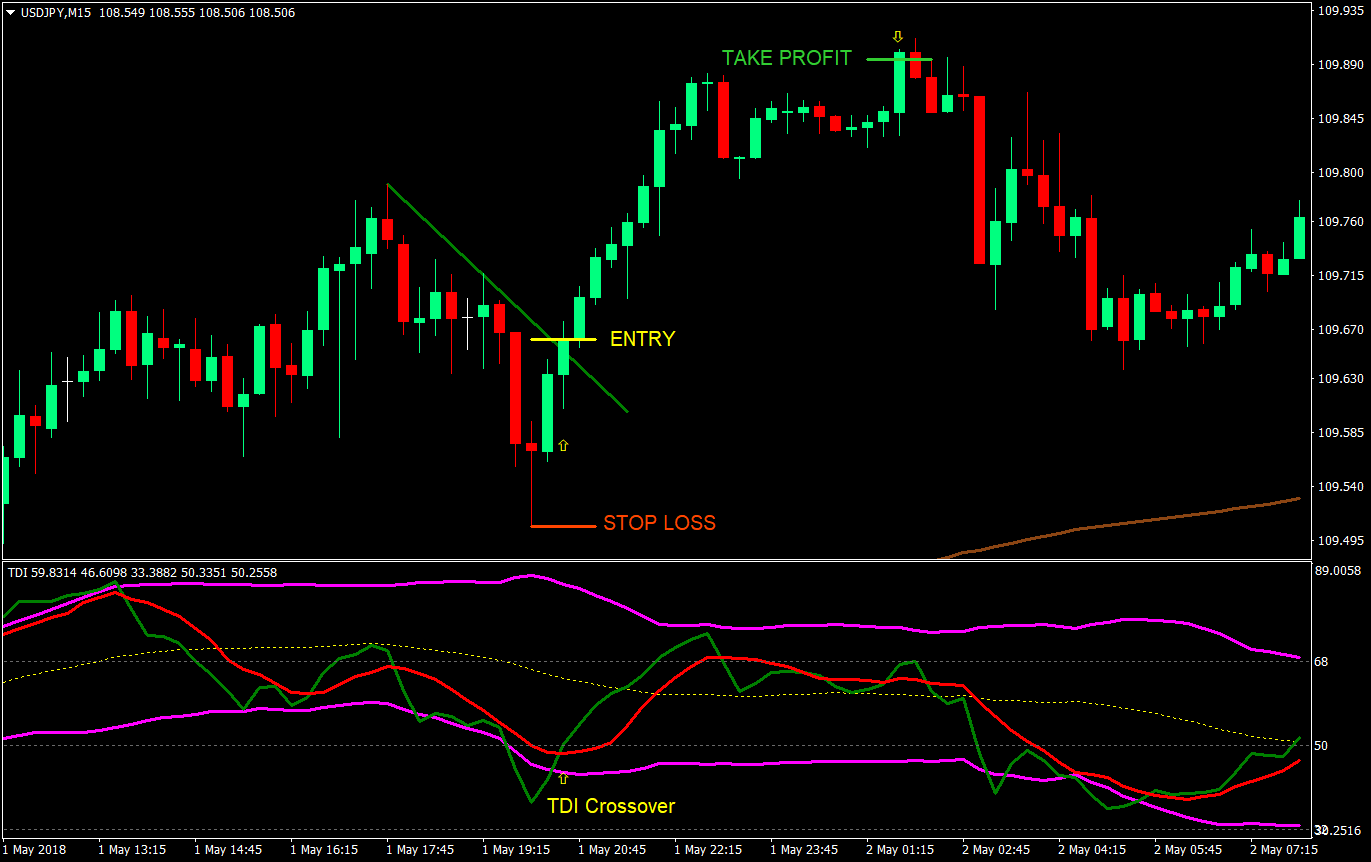 There are two schools of thought when it comes to trading the forex market. Some strategies opt to take trades based on price action while others prefer to take trades based on technical indicators. Both have its advantages and disadvantages.
For one, trading with technical indicators could sometimes be a little lagging, depending on the type of indicator that you are using. This delay on entering the trade could sometimes spell the difference between a profitable trade and a losing trade. Another factor would be the repaint. Most technical indicators tend to keep on adjusting as the market moves along. This repaints make false signals that cause confusion among traders, making traders take trades that shouldn’t be taken.
On the other hand, trading based on price action, such as breakouts, patterns, etc., also has its own pros and cons. On the plus side, it is a bit more less lagging as compared to most technical indicators. However, its weakness is in its subjectivity. Because price action is not mathematically derived, decision making based on price action could be more based on the judgement of the trader. This makes price action trading difficult to back test.
However, even though price action and indicator traders come from different camps, there is no rule that prevents combining both.

The Traders Dynamic Index (TDI) indicator is one of the most interesting custom technical indicators among forex traders. For one, it puts in a lot of information into one indicator. It has a Bollinger Band like feature which allows traders to identify overbought and oversold market scenarios on a dynamically moving line, which also acts as a support or resistance, it is plotted on a fixed range, allowing for an overbought and oversold market condition to be identified based on that range, it has an RSI like line which mirrors the movement of price, and it has a signal line derived from a moving average which acts as a crossover signal. All these features make the TDI one of the most complete technical indicator available to forex traders.
Below is an example of the TDI indicator. 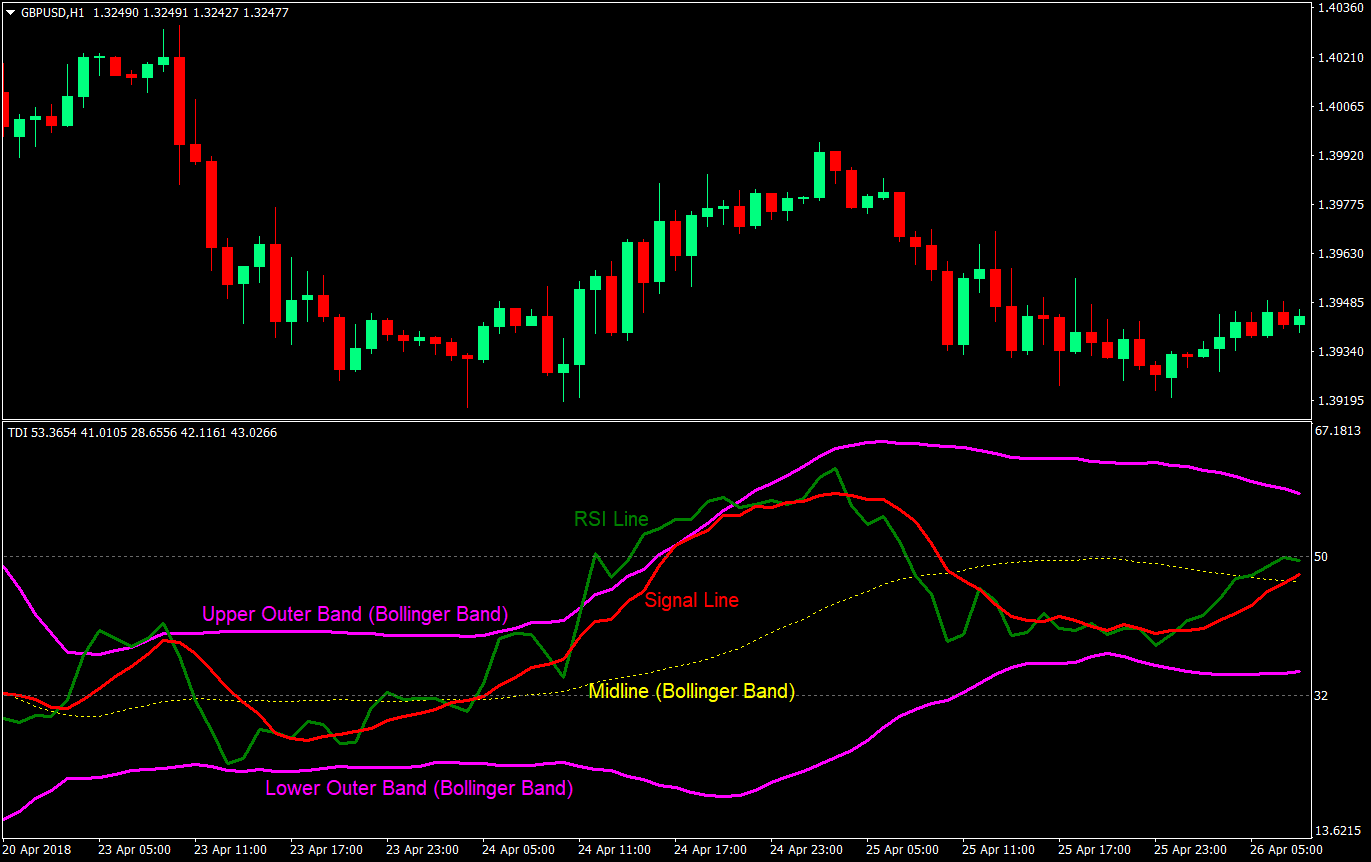 Signals are typically generated from the confluence of the different features of the indicator – a bounce off the Bollinger Band’s outer band or midline, a reversal on the oversold or overbought area, a crossover of the RSI line and the Signal line, etc. Having more of these in confluence should make the trade setup or strategy more high probability, but this could also limit you to lesser opportunities.

This strategy is a combination of a TDI indicator based entry signal and a breakout or breakdown from a support or resistance. Given that, this strategy should have a higher probability of success because it is a combination of both a very powerful indicator and a commonly traded price action strategy.
To filter trades further and to make identification of the direction of the market easier, we will be adding the 200 Exponential Moving Average (EMA). If price is above the 200 EMA, only long trade setups will be taken into consideration.
Also, to increase the number of trades that could be taken, we will be using only the crossover of the RSI line and the Signal line as our entry signal. Bounces off the Bollinger Bands and the use of the TDI’s overbought and oversold area will only be an additional confluence.
Given that the TDI also has the RSI line, we could also observe divergences, which could also indicate a probable market reversal. This will be helpful, but it wouldn’t be a requirement.
Timeframe: any
Currency Pair: any
Session: any 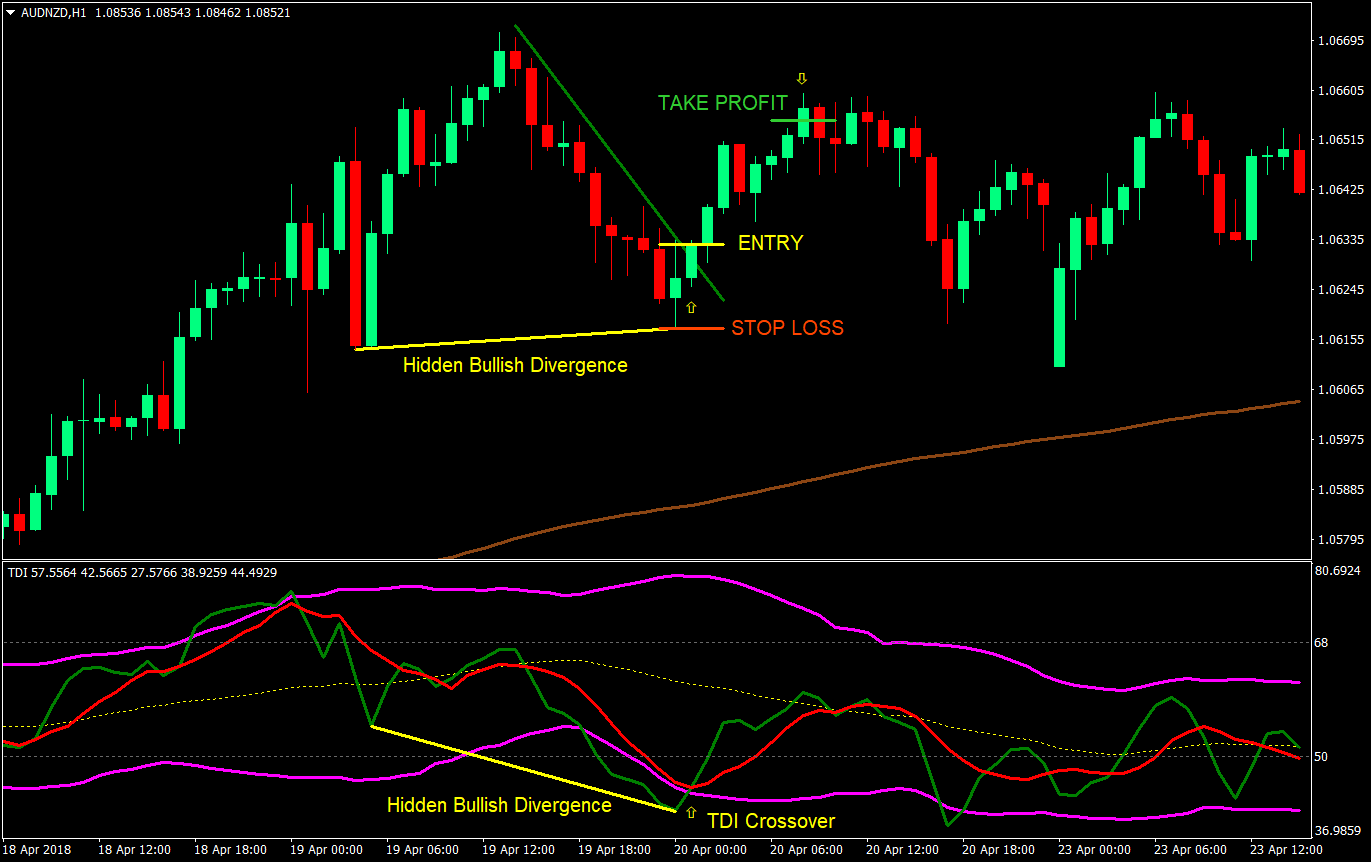 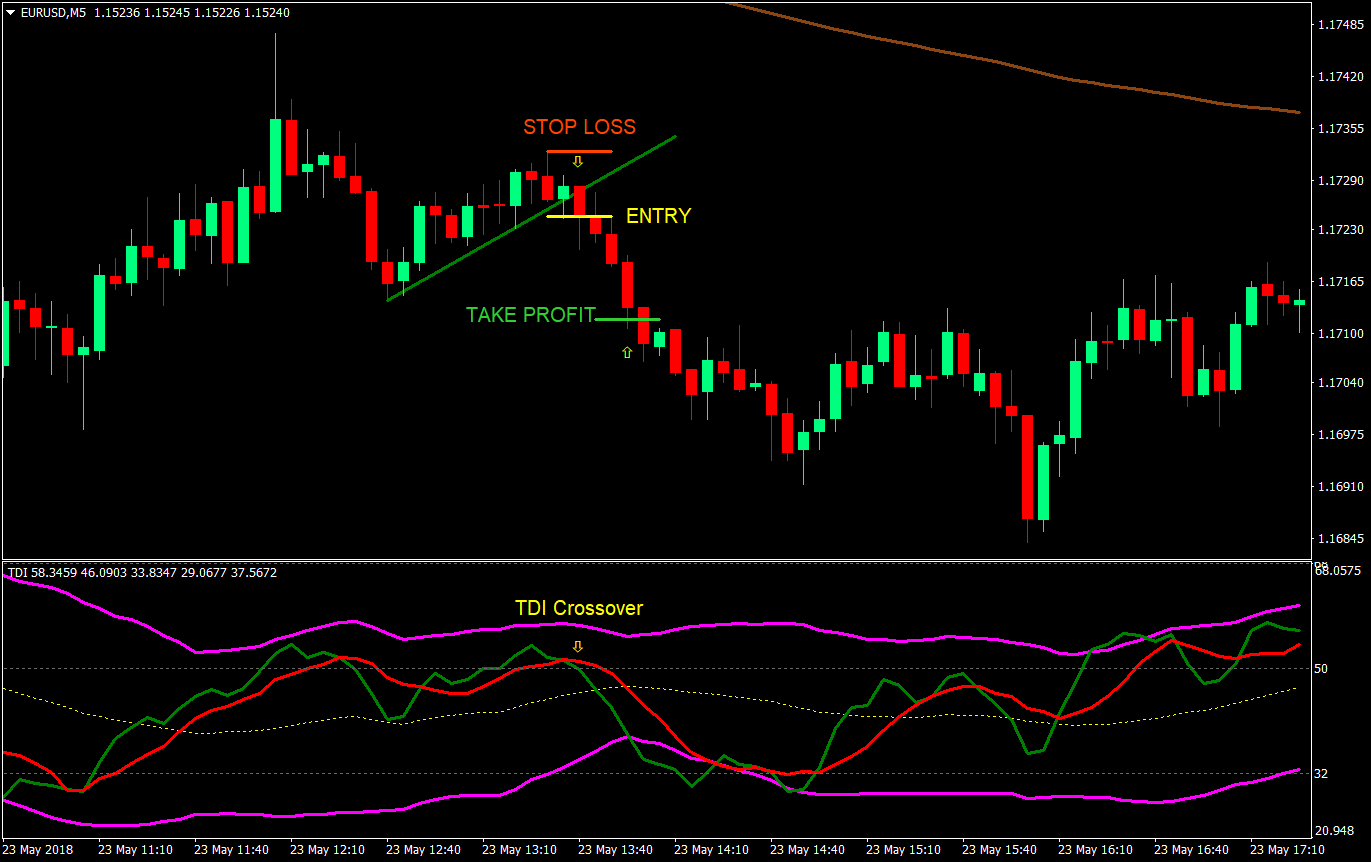 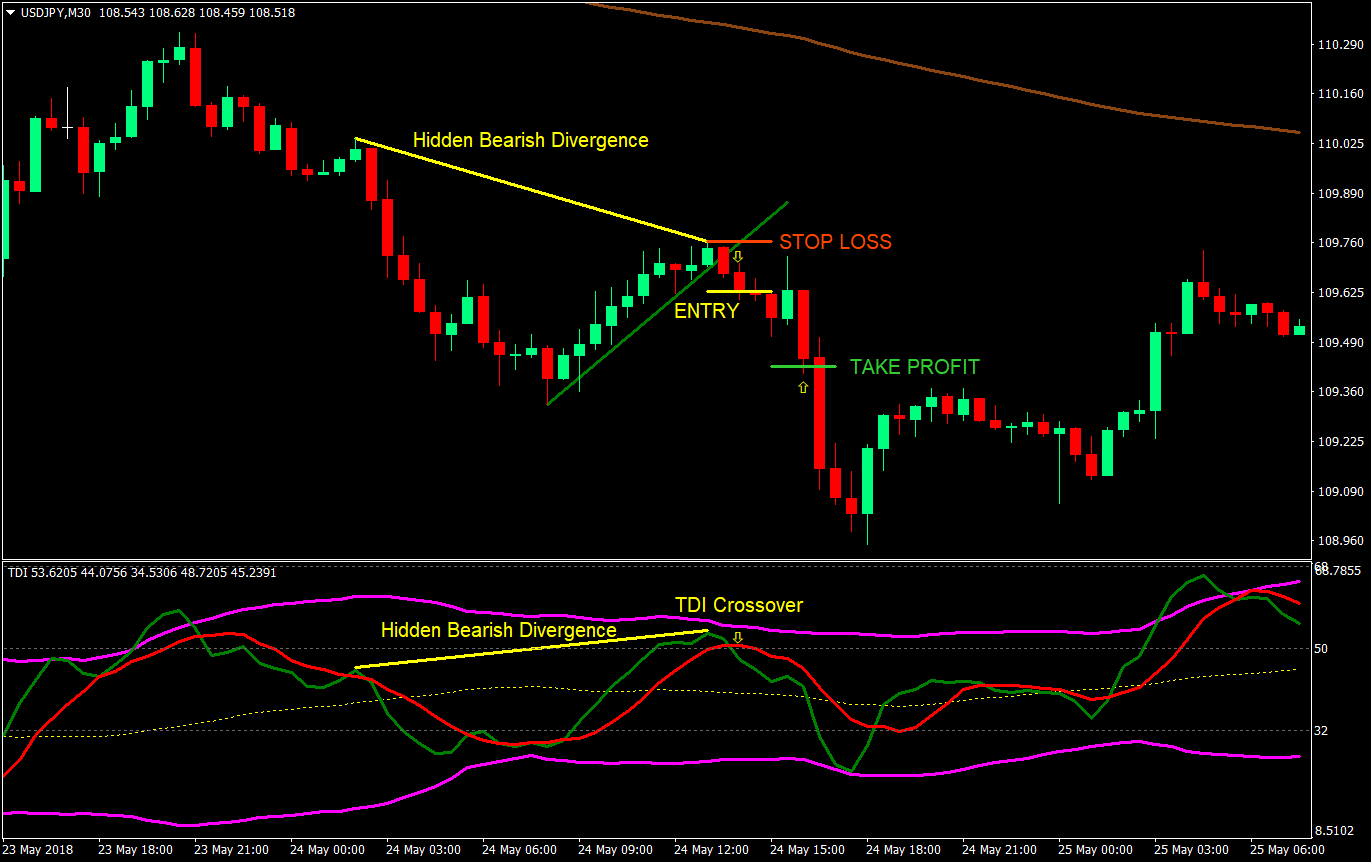 Usually, this strategy is used for day trading on the 15-minute and 30-minute charts, on major pairs, and during London and New York sessions. However, this strategy could also work for swing trading on higher timeframes.
It would be great to trade this strategy with the confluence of divergences as it could make the trade setup more of a high probability trade, but there are also many setups without divergences that do work.
One thing to look out for is that the far-right end of the TDI does repaint as price moves on a per tick level. However, as soon as the candle closes, the TDI up to the closed candle wouldn’t repaint. This is why it is best to enter the trade at the close of the candle.
With this strategy, the rules on the entry are pretty much solid. Where you can adjust though for fine tuning would be on the stop loss and take profit or exit rules. Experiment on it and make it yours.
This strategy is a working strategy that has probabilities in its favor. Although it is not perfect, it does work. You will get some losers, but the profits on the winners should make up for those losses.