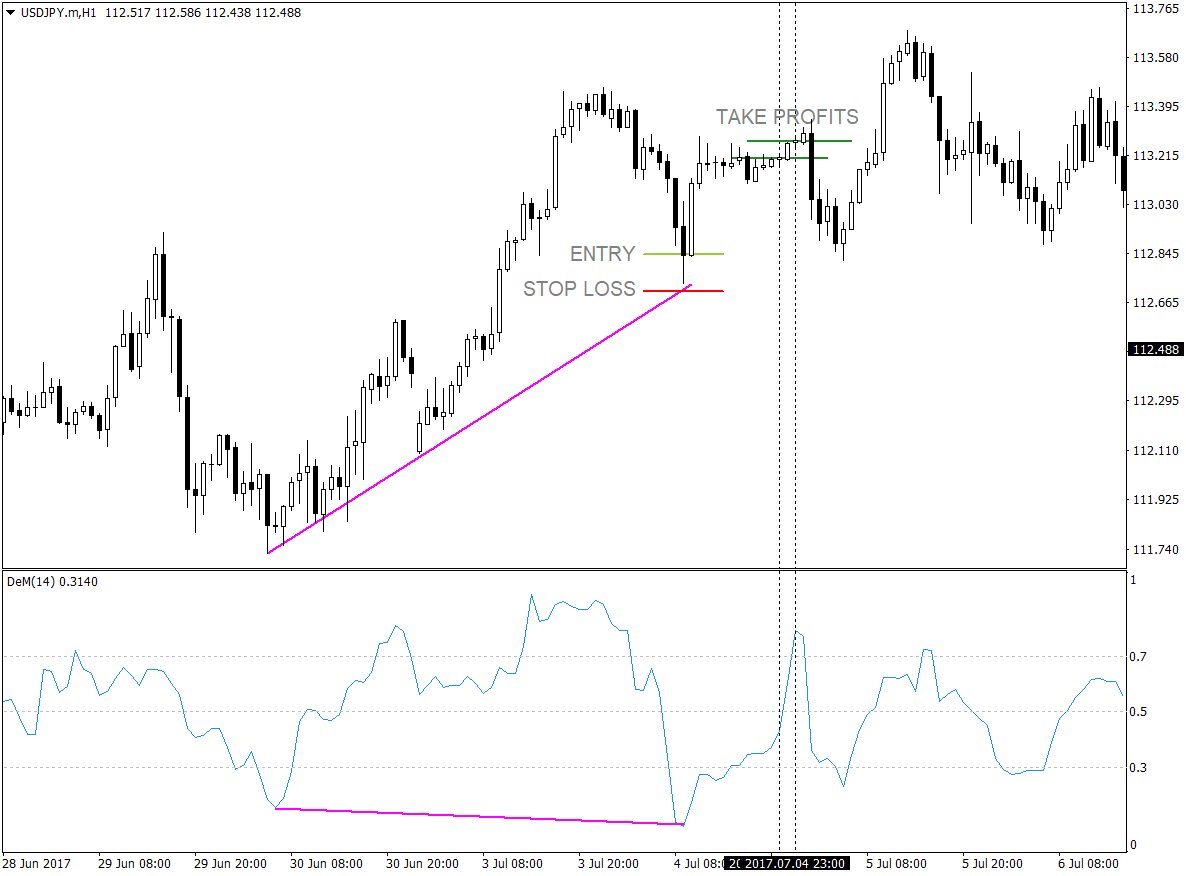 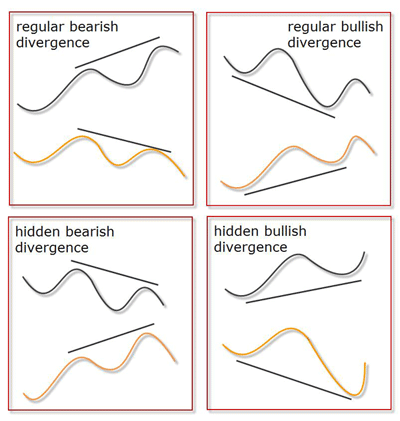 Divergences are powerful tools in trading as it effectively indicates a probable rapid price reversal. This is because since the price and the indicator disagrees for a moment, which forces one to follow the other.

Peaks and valleys going beyond the overbought and oversold areas will be the target areas for divergences. Although there may be divergences within the normal areas, but these areas don’t produce high probability divergences, so we will filter these out.
As soon as a divergence is detected, the trade should be taken on the close of the candle. Since the DeMarker indicator has a fixed range, the peaks and valleys when connected usually forms a horizontal line instead of a sloping line. These would still be considered as divergences if price is forming higher or lower peaks and valleys.
It would also help if you would have some knowledge on price action to indicate if price is about to reverse.
The stop-loss would be just a few pips below the entry candle for buy setups or a few pips above the entry candle for sell setups.
For the exits, we will be taking a partial take profit as the DeMarker indicator hits the 50% line. Also, as this happens, the stop-loss should be moved to break-even.
The final take profit should be taken as the DeMarker indicator crosses over the overbought line for buy setups or oversold line for sell setups. 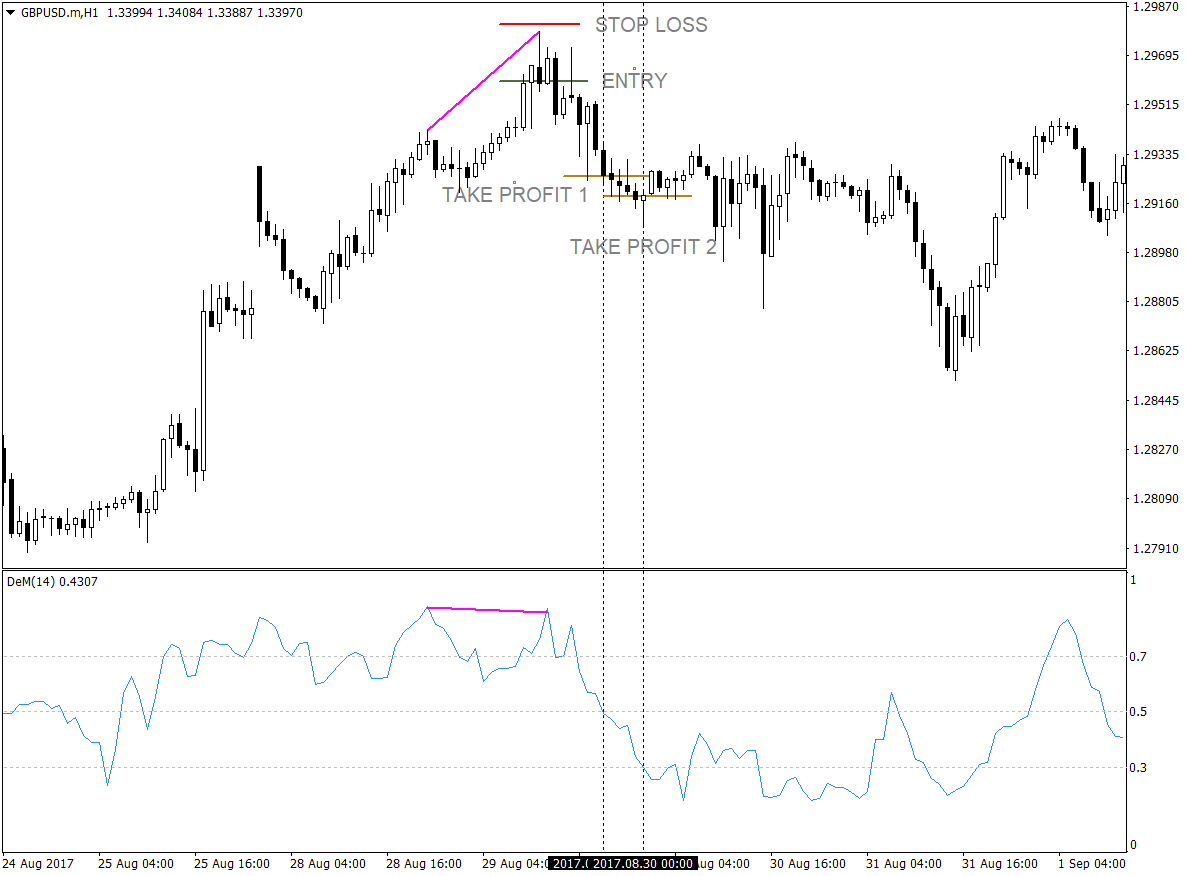 This is an example of a regular bearish divergence. The DeMarker indicator formed peaks above the overbought territory, which when connected, forms a somewhat downward sloping line. On the other hand, price formed a clear higher high. Also, price action did support the indication that price might reverse.
Positions were closed as soon as the DeMarker indicator touched the 50% line and the 30% line indicating it is already oversold. This trade earned 44 pips in total. 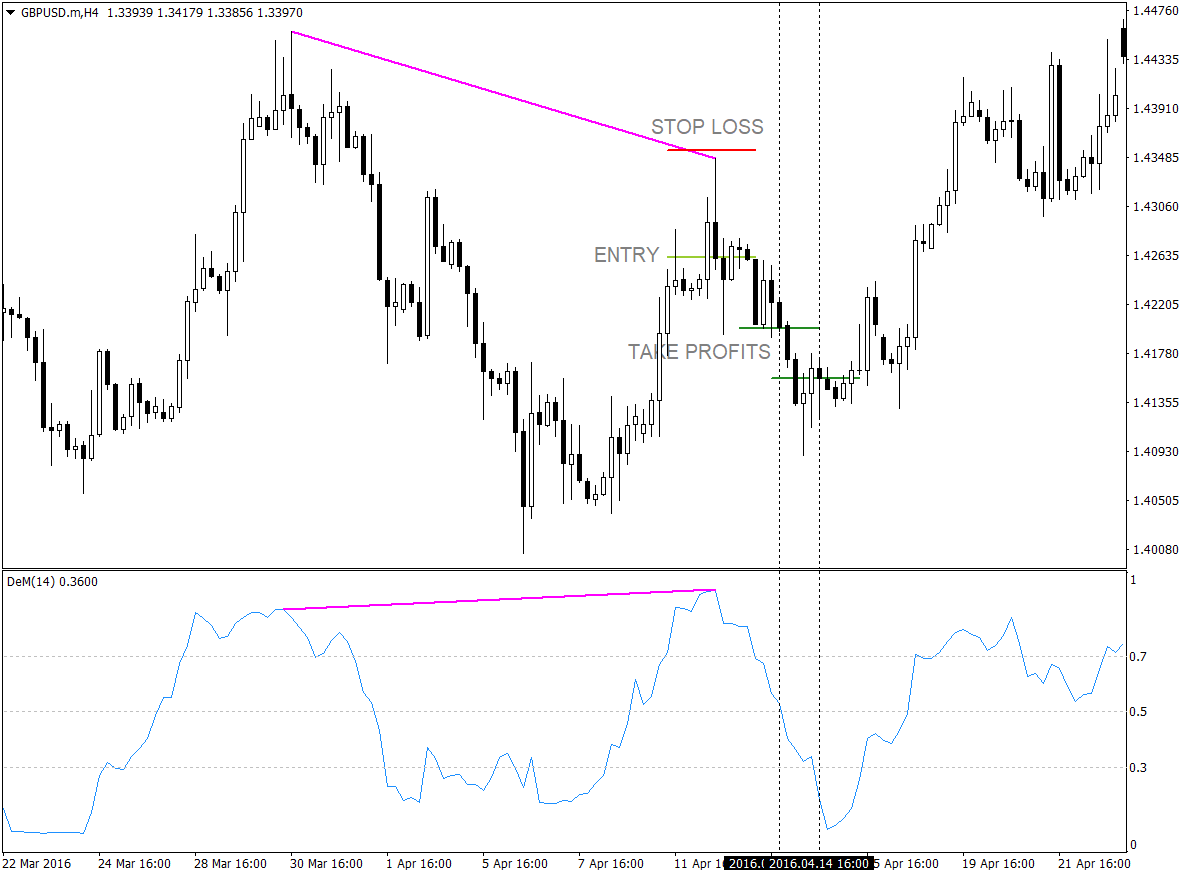 On this chart, we could see price forming a lower-high, while the DeMarker indicator formed a higher-high. This is considered as a hidden bearish divergence. If this trade was taken, it would have gained a total of 107 pips.

This setup is valid because price formed a higher-low while the DeMarker oscillator formed a lower-low, therefore this is a hidden bullish divergence. As soon as the DeMarker indicator touches the 50% and 70% line respectively, the partial and final take profits were taken. On this trade, 42 pips would have been gained if this trade was taken. 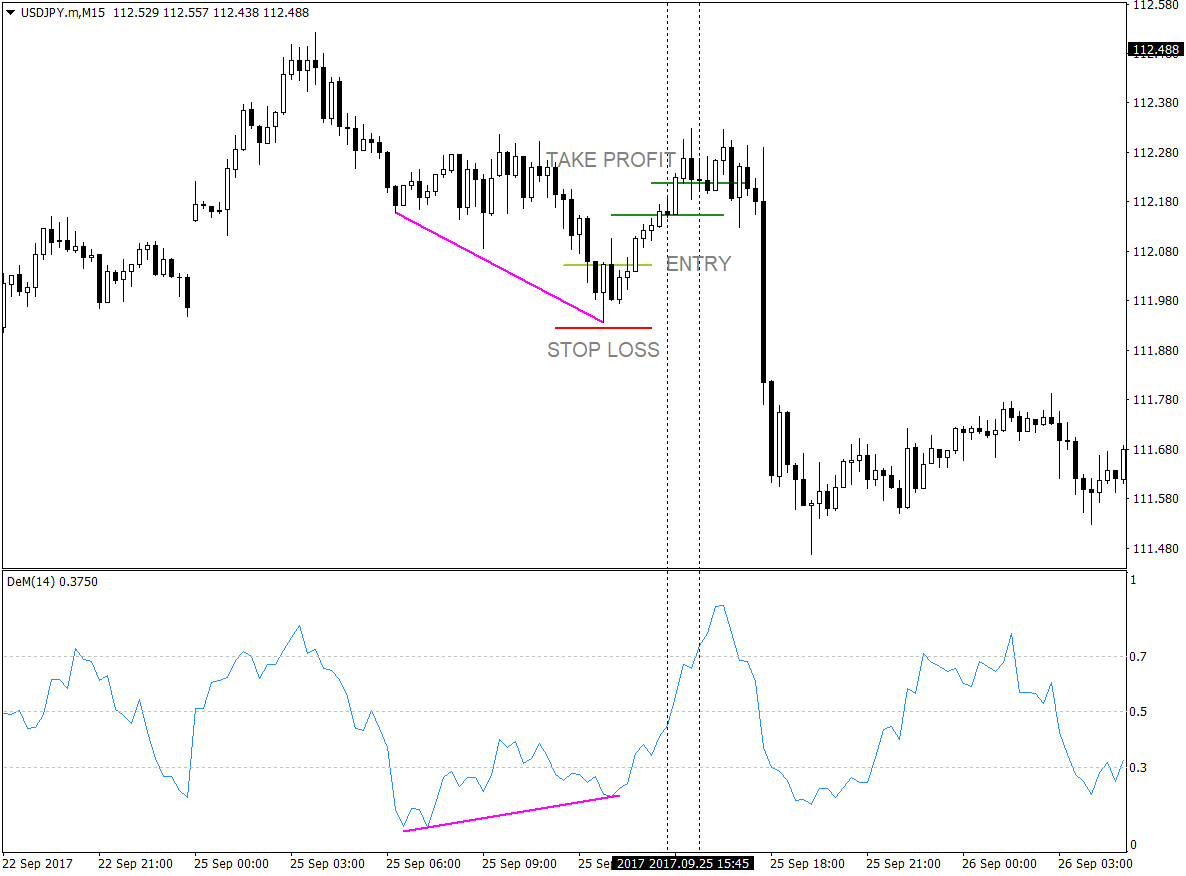 The DeMarker oscillator is an excellent indicator to use in detecting divergences. Its jagged peaks and valleys and its overbought and oversold areas allow for easy detection of such divergences, plus it filters out divergences that still hasn’t crossed the oversold and overbought areas.
Since this strategy doesn’t use an indicator to pinpoint the exact entry candle, it would also be beneficial to have a little knowledge about price action.
If used properly and with good money management, this tool has the potential to help traders gain from the market.

DeMarker Divergence Forex Strategy is a combination of Metatrader 4 (MT4) indicator(s) and template.
The essence of this forex system is to transform the accumulated history data and trading signals.
DeMarker Divergence Forex Strategy provides an opportunity to detect various peculiarities and patterns in price dynamics which are invisible to the naked eye.
Based on this information, traders can assume further price movement and adjust this system accordingly.